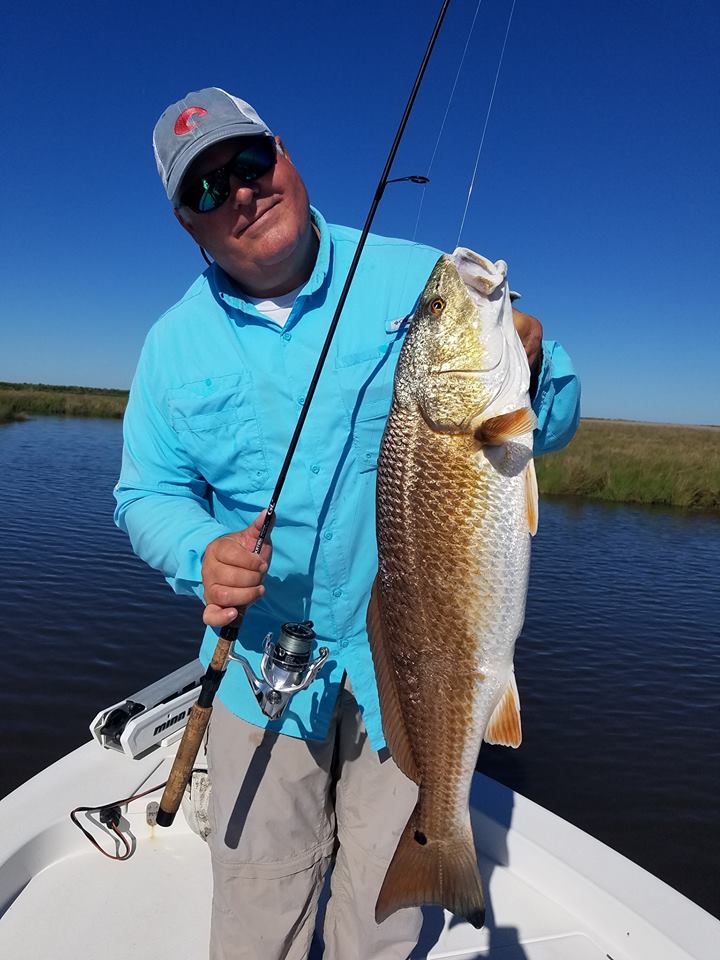 Originally from Crowley Louisiana, I have held a 100 Ton Masters License, for 30 yrs and have been in this business my entire life. I’ve also guided at Southern Cross Club in Little Cayman in the British West Indies for Bonefish, Permit and Tarpon. In Australia’s Northern territory for Barramundi, in Islamorada in the Florida Keys for Bonefish, and on the famous Mosquito Lagoon just north of the Kennedy Space Center for Redfish, Black Drum, Spotted Sea Trout, Snook and Tarpon as well as for Cobia, Kingfish, Sharks, Jack Crevalle, Sailfish and Big Tarpon off the beaches of Cape Canaveral.

You may have also seen me fishing on ESPN2, Florida’s Sunshine Network, Fox Sports and the nationally syndicated, Outdoor Life Networks “Addictive Fishing” show with Host Capt. Blair Wiggins. In fact, I did the first show that was ever produced, worked on the film crew and have done a total of five shows, a Costa Del Mar sunglasses and D.O.A. Lures commercial too.

How did it all begin? Well, when I was about 8 years old I went on a “Speck” fishing trip with my Dad and a friend of his at the Cameron jetties one weekend. We caught so many fish, the coolers were full and I didn’t have a place to sit down because there were fish flopping around everywhere, on the deck, in the bottom of the boat, on TOP of the coolers and even IN MY SEAT! So,… I just started throwing fish out of the boat! My Dad hollered HEY! What are you doing??? I said, I’M CULLING FISH! I had heard them talking earlier about throwing the small ones back to make room for the big ones so, at that point, they just figured I was a natural born fisherman! On the way home I was given my first beer, probably because I wouldn’t shut up about all those fish we caught, (those were different times) and the honorary title of “Fishboy” a nick name which he still calls me to this day!

I began working with my father Capt. Mickey Nash and my uncle Capt. Mack Nash on the Sunrise II and III for TBoy McCall out of Cameron Louisiana (sweeping the galley and swabbing the deck)  during the summers starting when I was just 12 years old. Both were teachers/coaches now but had worked summers on boats. Later, when the oil field began to boom, TBoy built a fleet of Oil field supply boats and my father began working full time as one of the Captains and my uncle Mack was the Port Captain.

In 1981 I enlisted in the U.S. Army. I was 17 yrs old and shipped off to basic at Fort McClellan, Alabama and ending up at Fort Bragg N.C. In the meantime, my father bought an old 65ft Breaux Bay Craft “crew boat” made for carrying workers to and from the Oil rigs and converted it into a “head boat” so, when I got out of the Army, I began working on my fathers Charter Boat, the “Big Mama” out of Sabine Pass Texas until we sold it in 1989. The Big Mama is in Jamaica now, working as a pilot boat.

In 1989, I decided it was time to get my license. First, I went to work as a deck hand on one of TBoy’s utility boats and was soon promoted to engineer. I studied for my Captains test every chance I got and took my test in 1990. Back then, you had to take it in the U.S. Coast Guard office and have proof of 480 12hr days or 720 8hr days at sea documented. I studied hard and passed, first try.

I went back to work for TBoy as a Captain and for a year or so I worked as a second Captain until I was promoted to first Captain and given charge of my own vessel. In the Oil field, the boats stay offshore sometimes for a month at a time so, you have two crews, working 12 hour shifts 24 hrs. a day.

At that time there was no GPS, just LORAN and it didn’t work after the first 50 miles so, if you were traveling out to an oil rig 150 to 200 miles offshore, you better know how to navigate! I mainly worked seismic surveys and commercial diving “liveboating” operations.

I always brought my fishing rods with me and sometimes we would have it easy either tied up and hanging off the rig fishing for Red Snapper, Grouper and my favorite, Trigger fish, or we would be waiting at the dock for the weather to break so a dive job could start so, I’d put the aluminum john boat in the water, grab my hand held radio and a rod, and off I’d go! I bet I fished every marsh area from Rockport Texas to Pascagoula Mississippi for Redfish and “Specks”. That’s what they call Spotted Sea Trout in south Louisiana and Texas.

Questions? Shoot me a message here: